“Wind of Change” is an evocative phrase which may conjure up in your mind anything from a gentle soothing breeze to a powerful destructive hurricane.

“The wind of change is blowing through this continent. Whether we like it or not …”

From Harold Macmillan’s famous “Wind of Change” speech in early 1960, stating the British Government’s intention to grant independence to former British colonies, to the Scorpions’ “Wind of Change” song, produced thirty years later in 1990, celebrating glasnost and the fall of communist governments across Eastern Europe, change has been messy, often unpredictable and at times sadly violent.

Take me to the magic of the moment

On a glory night

Where the children of tomorrow dream away

In the wind of change

Fast forward another thirty years and we are predicting a similarly seismic event, for education, in 2020 with the establishment of a Royal Commission on Education following years of excessive, poorly thought through and badly implemented educational change.  We are in the wrong jungle, travelling in the wrong direction, hacking through the undergrowth with worn out tools.

The Vision 2040 concept was conceived by the brilliant Sue Williamson, co-ordinated by the SSAT (UK) Team (Tom M, Glyn & Jane) and brought into being through the tireless work of the group’s first Chair Tom Sherrington.  Since then a committed team of people, running this work alongside their day jobs, sought to propose an education system beyond the topsy turvey five year political cycle.  Thanks Kev, Michael, Annie, Sapuran, Rachel, Nigel, Alex & Rosanna for all their hard work.  Vision 2040 was born.

“My hands were clammy. My heart was threatening to burst from my chest with excitement mingled with no little terror. It was my first lesson. If I could unstick my dry mouth, I might be able to start. The first words come out of my mouth. It’s the first of September 2015 and my teaching journey has begun.”

Today has seen the launch of the Vision 2040 pamphlet which seeks to describe what might be, over the next 25 years, from the perspective of a newly qualified teacher joining the profession this September.  We cannot pretend that we have any special or privileged insight into the future.  What might be and what will be are two different things.  The Vision 2040 Group has attempted to produce a meta-narrative describing significant change to: Professionalism & Professional Cultures; Learning (Pedagogy, Curriculum & Assessment) and Governance (Structures & Systems) over the coming decades.

The coming Parliament is going to be a difficult one for Education.  The impact of austerity will reach schools’ budgets with leaders and governors already concerned about where 10% cuts can be made.  The Global Education Reform Movement (GERM) with its competition between schools, standardised tests, narrow curriculum priorities, pernicious accountability and business capital model will continue to drive many more teachers out of the profession.

“I still remember the morning when the head called us in for staff briefing to explain that the recent inspection couldn’t have gone worse: ‘We are in special measures.’  He wished us well and thanked us for all our hard work and commitment.  His desk was empty at the end of the day.  The following few years of being sponsored were a blur: lots of ‘improvement’ activity but with limited impact on the children’s outcomes.”

The much less drastic, slowly evolving pincer like demographic changes will have a significant impact by 2020.  The baby boom generation of the 1960s will retire and the increased numbers of children in primary schools, will increase further, and feed through to secondary schools.  Teacher recruitment targets have been missed for a number of years and too many teachers either don’t enter the profession, at the end of training or leave, before having any real impact.  At a time we arguably need more teachers we will in fact have fewer.  The Decade of Deregulation (2010 – 2020) comes to an end.  We’ve deliberately painted a pessimistic scene to trumpet the arrival of the Royal Commission for Education in 2020.  They will fan the winds of change. We need to organise our way out of the current structural chaos.  Let’s keep it simple.  Local families or clusters of schools who work together, to advantage all the children they are responsible for, reaching out to their shared families, with a flexible governance structure determined at a local level.  The same “freedoms” shared by all.

“The Royal Commission determined that there would be one standard governance model for all, based on a small number of schools (no number was ever given, but the most common groupings had 7-12 schools) working in deep partnership.  The schools were always geographically close to each other and as a family of schools could always identify who ‘our children’ were.  The freedoms available to some schools in the previous decade, had been revisited and a common core of freedoms was agreed to benefit all schools.”

These families will be the deep partnerships from which will form extended relationships to add value to their work.  Possibly the most radical suggestion is the formation of an extended Royal College of Teaching with regional establishments, home to HMI Teams, as a means of wisdom building and wisdom sharing.

None of the Above

The current different and disparate routes into teaching have various strengths and weaknesses but if asked I would vote for “none of the above”.  With approximately a fifth of people who train as teachers never entering the classroom and far too greater drop out in the early years it’s time for a radical rethink.  The proposal for one high quality extended route into teaching will not be welcomed by all.  Many powerful organisations have vested interests in protecting the status quo.  However, a Masters level qualification which covers subject content, pedagogy and managing classroom behaviour will serve future teachers well.

“The system of teacher training quickly began to cohere and the prestige of the profession was transformed with a speed that I hardly anticipated. The early years of the teacher’s curriculum was focused on subject expertise and pedagogy, leading to a Masters qualification.  I missed out on this but instead embarked on one of the second Masters available to teachers, after five years in the profession, which focused on becoming a researcher in the classroom.  Teaching went from being a no Masters to a two Masters profession overnight.”

“A positive spiral ensued, whereby teacher agency, set as a core value by the commission, was central to the professionalism of teachers, who were now in control of the core business of learning in schools.  Teachers were given the freedom to create a world-class provision in their own setting and supporting other teachers to do the same.”

The current incoherent implementation plans for curriculum change in England sits in stark contrast to what is happening north of the border.  Our story contrasts the national curriculum changes which have been imposed on children and schools over the past 25 years, our storyteller was in nursery when the first national curriculum was imposed in 1988, with a very different model which started in 2025.

“The national curriculum was eventually just that.  It was agreed and a 15-year implementation plan was set out, starting with the early years and foundation stage in 2025 and finishing with the school leavers’ examinations & certificate, born out of the HeadteachersRoundTable national baccalaureate, being implemented in 2040.  The generations of children going through our schools benefitted from the coherent, staged and manageable process of curriculum change.  This wasn’t the usually expedient pace of change determined by politicians in the past, but it received their full support.”

The story is one of schools and teachers engaged in and leading large elements of educational change particularly those aspects which they have greatest knowledge of; curriculum, pedagogy and assessment define our professionalism. 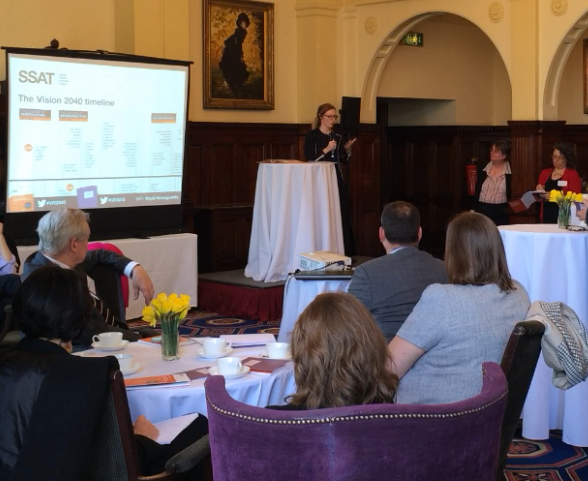 Closing the gap is a good thing but not allowing the gap to appear is a better thing.  Our Royal Commission of Education sets in place “core values for the education system of equity, quality and agency” with “a wide set of metrics covering the three strands of educational outcomes, personal outcomes and social outcomes for children” to evaluate the effectiveness of schools.

The pamphlet envisions a system, with high equity at its core, leading to a rethinking of what it means to require learning support and an extensive school based set of professionals uniting education, health and social services.

“The shocking scale of child and adolescent mental health problems, limited access to the professional services required, and growing exposition of child sexual abuse (the scale exposed was almost beyond belief) in the 2010s had led to an increasingly diverse set of professionals working in and out of schools.  It has been an incremental but relentless change.  I now have routine access to trained mental health professionals, on site, who work with the children, but also outreach to the families, where the need is often similar, supported by the social work team.”

As the story moves from the Decade of Deregulation to the Decade of Reconstruction (2020 – 2030) and through to System Maturity (2030 – 2040) the system’s core values become shared and lived out:

“Equity, quality and agency are interdependent, mutually supportive values which produced a positive spiral of improvement.   They form the key values on which our education system has been built and they permeate the life of our schools.  These values guided our direction of travel towards 2040.  They are the touchstones of policy making at a system and school level.”

These are just snippets taken from the Vision 2040 document.  We are hoping to distribute the pamphlet far and wide to encourage people to openly and honestly debate where our Education System should go in the years ahead.  This is our Education System not a political football that only a privileged few should make determinations about, let’s engage.

Vision 2040 – A Vision for Education Beyond Five Year Policy Cycles 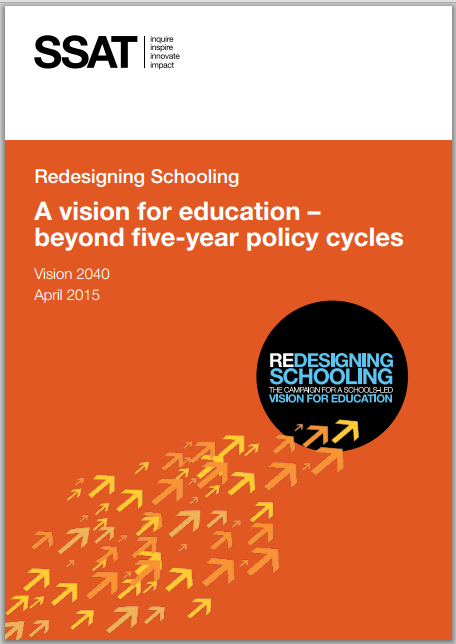 Please join in; debate, challenge and write your own vision using #Vis2040.  If you share via twitter please copy me in (@LeadingLearner) and I’ll retweet.

The SSAT has also released it’s Policy Recommendations for the incoming Government and you may download it using the link below:

Below is our starter for 10 (taken from the pamphlet):