When speaking at the Headteachers’ Roundtable Summit last week, I twice made the statement that, “Opting to lead a challenging school is like playing Russian roulette with your career”.  It was tweeted, retweeted and liked. 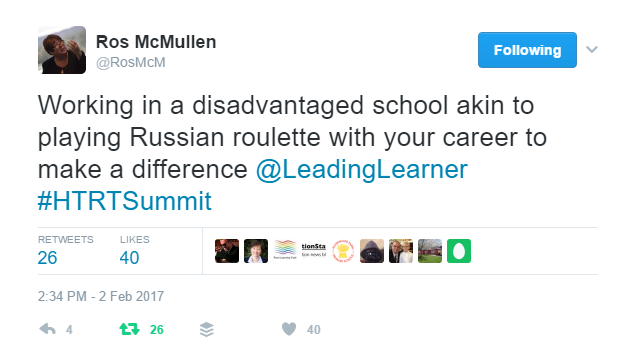 This is one example from @RosMcM

Statistically, Ofsted are far more likely to damn a school, judge it as inadequate or requires improvement if it has a disadvantaged intake.  The use of attainment based accountability measures, like 5+A*-CEM, uncontextualised progress measures and human inspectors, biased and fallible like the rest of humanity, are further damaging and disrupting these fragile schools.  Turnaround schools that boast of huge success are too often exposed and shown to have permanently excluded or surreptitiously removed from roll a large number of pupils.  Their “success” is lauded when they should in fact be held to account for unethical practice.

Sadly, a headteacher who walks into a school with the vast majority of pupils from disadvantaged backgrounds and says, “We’re going to love the ones we’ve got” is more likely to be targeted than supported, by our current accountability system.  Fear of what might happen; sheer exhaustion or the almost inevitable axe following an adverse inspection report lead to another leader lost from our system.  A chaotic and disorientating void in leadership ensues and ultimately pupils lose out.

As leaders we are “responsible and answerable” for what happens on our watch; this is not a call for no accountability.  I just like my accountability to be valid, humane and rooted in wisdom.  As governors and directors we have to take the long view both backwards and forwards.  I’ve been truly blessed to work with a great governing body and now Trust Board.  They’ve understood the need to ride the annual rollercoaster of school improvement never being hoodwinked by the steep gradient, straight lined improvement graph beloved of bureaucrats.

I consider myself a reasonably competent school leader; not brilliant but overall competent.  Sticking around for fourteen years in headship was the key; I implemented, monitored, evaluated, learnt, rethought, revised and implemented again.  I saw things through and lived with the consequences of the decisions I took or was part of taking.  This tends to take off a few of your rough edges and dull any overblown perception you have of your abilities.  We need to recruit the very best leaders into our disadvantaged schools and keep them there for a decade or more to effect the cultural changes that are sometimes needed.

A few thoughts for governors, directors and inspectors:

Don’t just look at the tenure of the current headteacher think/check how many headteachers have led the school over the past decade, include people in acting positions.  If you need your fingers and toes the problem isn’t the current headteacher; don’t blame them, support them.  S/he has stepped into a nightmare scenario and should be respected for doing so.  It takes years to turn things around.

If the headteacher’s office has been fitted with revolving doors in recent years don’t expect to find a happy staff or pupil population.  A new headteacher attempting to implement new systems and processes, in order to stabilise the school, will create more unhappiness than contentment in the first few years.  Some staff and pupils may simply not like or accept the new ways of working; they’ll let you know.  Many more will just be suffering from “confusion resistance” and fatigue.   So many different, varied, incompatible demands from one leader after another can produce a bunker mentality, “I’ve no idea what this one wants; I’ll carry on doing what I am now.  S/he won’t stay long; they never do”.  In the current maelstrom of real term cuts, budget difficulties and staffing reductions these feelings are exacerbated.  Staff are worried about their futures and pupils have less and less support available.  It takes years to turn this around.

Have a look at retention rates for the school.  By this I mean the number of pupils who leave the school; particularly focus on the years closest to external examinations, Years 1 & 2, Years 5 & 6 and Years 10 & 11.  Rapid, miraculous, unbelievable turn arounds are usually just that, unbelievable; particularly as the size and complexity of a school increases.  The price of rapid improvement is usually paid for in reduced life chances for too many vulnerable young pupils.  If you find things regress slightly but your new headteacher has drastically improved retention rates – loving the ones s/he’s got, holding the most difficult and damaged pupils in the education system – you’ve got an ethical gem of a leader.  S/he is doing the right thing and will keep on doing what is right and proper in the longer term.  This will benefit your young people and school over time.  It takes years to turn things around.

Don’t sweat the detail too much or too soon.  This is particularly important if visiting or inspecting the school.  If inspecting for two days you are seeing just 1% of the school year, at most; you probably saw 0% of last year.  If you walk into a school and are there are people swearing, fighting, smoking and drinking in the corridor (and that’s just the staff); I accept there is a significant problem.  Too often people are swayed by the immediacy of what they see and understandably don’t take account of what they’ve not seen; it’s called being human.  Due to the criteria Ofsted use to appoint inspectors, an inspector is far more likely to come from a school with an intake that has high prior attainment/is more affluent.  The impact of domestic violence, poverty, poor mental health, substance abuse, homelessness, poor living condition, not enough to eat and a lack of care inspectors will have met in their career; just not in these numbers or concentration.  Don’t make matters worse; contextualise what you see including the progress data.  What does the big picture look like and is the general direction right?  Detail and sweating the small stuff comes later; its use is in a different part of the journey.  It takes years to turn these things around. 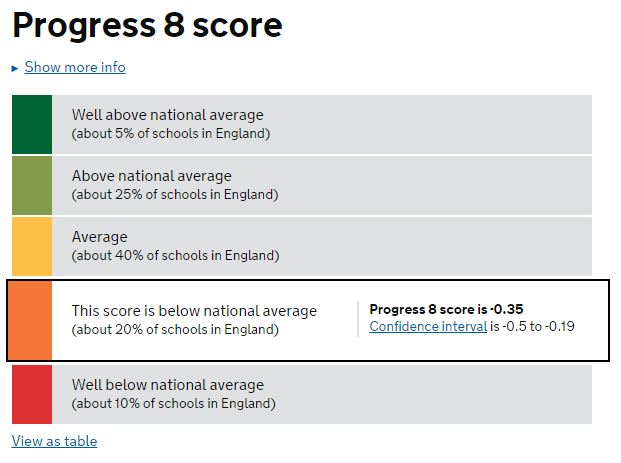 From a school with 70% Pupil Premium (Disadvantaged) Pupils. Contextualise for disadvantage and the Progress 8 is circa -0.08 (not bad at all)

Our current short termism can come with the best of intentions; these pupils only get one chance.  However, it is in danger of trying to unsuccessfully rescue a cohort whilst disadvantaging generations to come.  Much of the above is also true for subject leaders and teachers; if leading a school you need to show the same humanity and wisdom we rightfully expect of governors, directors and inspectors.

If you are leading or have led in a challenging school or disadvantaged community; I tip my hat to you.  Good luck.  Written in recognition of good friends and colleagues, I admire greatly, who stepped up to the plate.

6 thoughts on “Playing Russian Roulette with Your Career #HTRTSummit”