In this set of posts about redesigning classrooms I want to look at some of the changes that teachers can incrementally make to their classrooms that may over time transform their practice.  The first post about the SOLO Taxonomy can be found here: 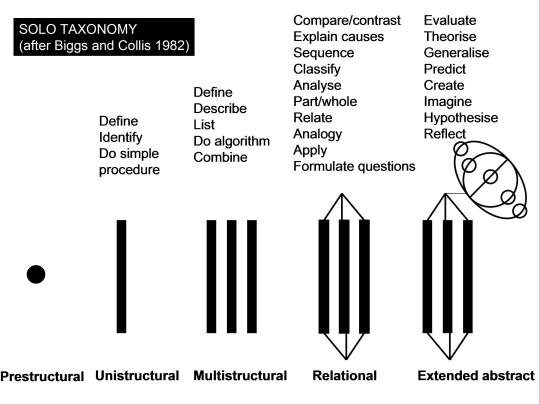 SOLO first appeared as part of our CPD programme a number of years ago and all staff are familiar with it, however, a number of staff have started taking the use of the SOLO Taxonomy to new levels, spreading and embedding its use as they go.  One of the interesting dimensions of the work is how staff are using the SOLO Taxonomy with students and explicitly developing their understanding of it and how to use it to increase the depth of the work they are doing.  This post is a series of short inputs from staff at St. Mary’s

In the Art, D&T Department we are developing student friendly success criteria based on SOLO Taxonomy that allow us to identify ascending cognitive complexity in individual and collective student performance for understanding when mastering new learning. This will allow us to easily and reliably assess students’ progress. 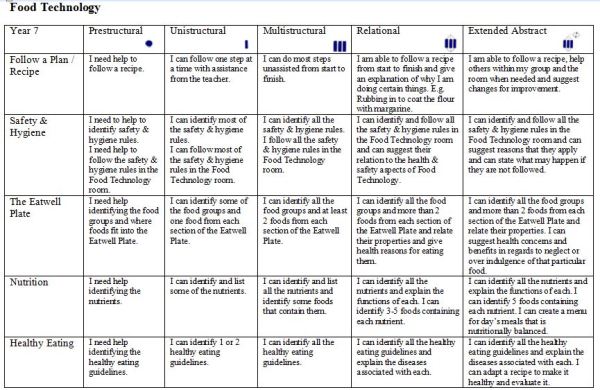 Example of success criteria for students in Food Technology

The next step is to incorporate the 5 R’s using SOLO Taxonomy. We are also incorporating GCSE exam questions into Key Stage 3 lessons to allow students to demonstrate relational and extended abstract understanding.

We made a decision to teach SOLO taxonomy discreetly to students in order to demythologise the whole concept.  We used a card sort on topics familiar to the students (Blackpool FC and the X Factor) and they had to sort information into one of unistructural, multi structural etc. 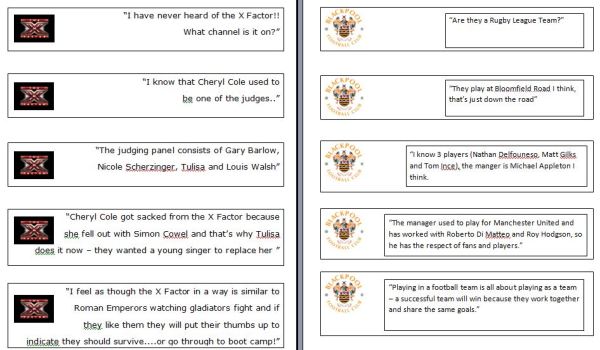 The students grasped the idea immediately and were table to transfer these skills to recognise where a religious topic moved from multi-structural to relational or extended abstract levels. Our lesson planning was revolutionised by the success of this initial lesson as we then attempted to ensure that students learned some declarative knowledge (multi structural) early in the lesson and were then able to make the move to functional knowledge (relational/extended abstract).The level of challenge in lessons has increased markedly as each lesson requires students to think at a higher level at some point.

The lesson plan and a further exemplar can be found below:

When first faced with SOLO as, what seemed like yet another initiative to ‘get in the way’ of any actual teaching and learning, a sense of déjà vu, tedium and (if I am to be entirely honest) slight annoyance set in.  However, it takes a brave teacher to admit when they’re wrong.  In fact, SOLO has proven itself in my classroom time and time again to be an invaluable tool which is an accessible catalyse for students to: easily understand how ideas within the subject connect by forming real meaning of their learning; partake in cognitive demanding activities to achieve deep learning and appreciate the necessary strategies which are needed in order to unpack their skills.

I have found that by integrating SOLO into my planning, through the learning objectives and success criteria, students are more able to co-construct the lesson, using SOLO terms, as they actually become eager to achieve an extended abstract level of understanding within the lesson.  The power of SOLO within their own learning instantly creates high challenge, due to a greater level of engagement, and students being able to, almost instinctively, identify their next step and maximise their conceptual understanding.

The “SOLO Taxonomy and Making Meaning Workbooks” (Hook & McNeill) are tangible resources within the learning environment which put SOLO into real practice (something I know myself and the department craved in order for an educational theory to become reality).  The SOLO maps and rubrics within these texts have now become a staple part of English lessons, allowing students to select them as learning tools in order to scaffold their understanding.  I also find an insightful activity for students, and me as their teacher, is to ask them to define the SOLO level of an activity and then challenge them to change the activity in order that it be classed as extended abstract, which they then complete.  This activity also works well with forming questions on a given text, for example when analysing the writer’s purpose.

SOLO is one of those rare teaching acronym initiatives that actually works, in terms of: in a real classroom, with real students, to see real improvements in their metacognitive skills.  Embedding SOLO within my own teaching has effortlessly led to more engaged, higher achieving, interdependent students who can lead their own learning…albeit to my surprise.

This is an example of the HookED SOLO Describe ++ Map that can be found in the “SOLO Taxonomy & Making Meaning Series. The books contain a number of different SOLO Maps and examples.

Essential Resources: (there are Australia, New Zealand and Rest of the World websites for Essential Resources as well) publishes some fantastic resources – “SOLO Taxonomy & Making Meaning” are a set of three literacy based books, two books that introduce “SOLO Taxonomy: A Guide for Schools” are two books that give you a great introduction to SOLO and finally one titled “Using SOLO as a Framework for Teaching” are all worthwhile.

SOLO Taxonomy can be used to produce increasingly complex hinge point questions.  The final slide is taken from a video in which @eric_mazur is explaining how the Flipped Classroom works.

Students armed with a white board and a pen select the answer they think is correct.  If a large majority of the students have the right response it’s probably best to quickly explain the answer to other students and then move on, don’t linger too long as most students won’t be learning anything.  If the number of students getting the correct response is somewhere between 30-70% (Eric Mazur’s figures) then resist giving students the answer and get them to discuss it with each other – this can lead to some really great debates.  If fewer then 30% of students have the answer you probably need to take a step back and revisit some earlier work as somewhere along the line their learning has a disconnect – can you prompt them forward to the next SOLO level without simply giving them the answer?

This series of slides is to help students learn about the expansion of solids when heated.  This first slide just requires students to describe a series of events linked to the age old ball & hoop experiment.  It would follow a demonstration of the experiment and is at a multi-structural level.

Hinge Point Q1 – Describe is at a multi-structural level

This second slide moves to a relational level in SOLO terms as students are required to explain what has happened.  The slide contains the correct answer and a common misconception amongst students to really test their thinking. 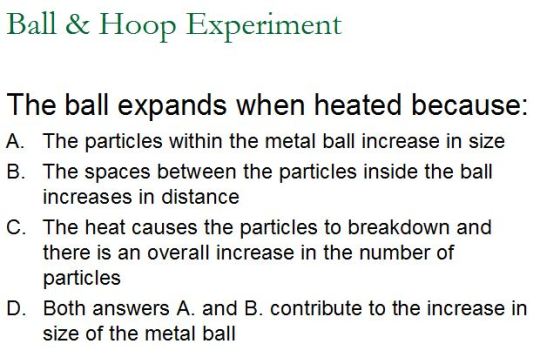 Hinge Point Q2 – Explain is at a Relational Level

Finally it’s a move to the extended abstract with the students asked to hypothesise.  This is a really tough ask which has baffled more than one Science teacher I have used the slide with. 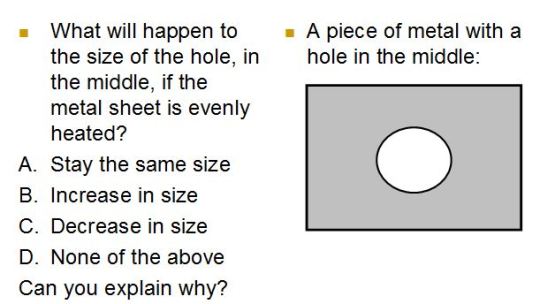 Hinge Point Q3 – Hypothesise is at an Extended Abstract Level

If you’re not sure think about the answer to slide 2 and the particles on the edge of the hole in the middle.  A “student model” is really useful here.

If you would like another way that SOLO Taxonomy is used at St. Mary’s to ensure we have rigorous and challenging Project Based Learning, please see the post below: