Exclusive: My Debt to Comprehensive Schools

With thanks to the Daily Mail for featuring my exclusive story, I would like to explain why, having gone to a comprehensive school, all schools must now become “bog standard”.  The whole thrust of national educational policy now seems to be predicated on personal preferences and singular experiences.  It leaves many people in despair. 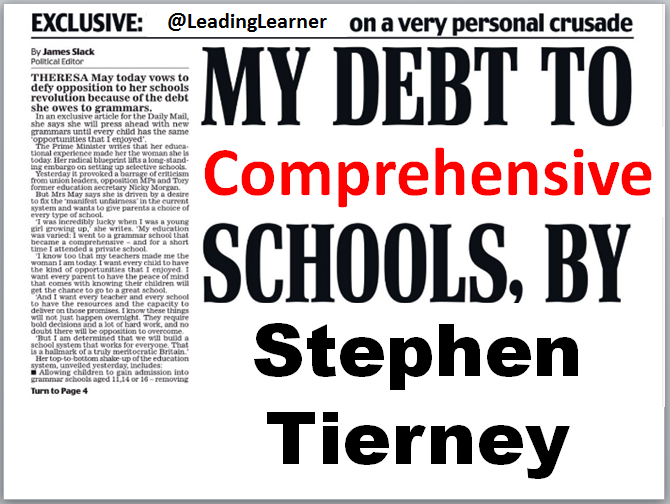 Whilst older than Mrs May my Mum and Dad also grew up at a time of grammar schools.  Their experiences were quite different.

“Dad … missed nearly two years of primary schooling due to rheumatic fever.  Despite that he passed the 11+, he was in the first year that sat the test, but with no Catholic grammar school in Southport he went to Our Lady of Lourdes Modern Secondary School.  Two years later he passed the examination required to be admitted to Southport Technical College.  He was to follow the technical/vocational created by the 1944 Education Act for two years before leaving at fifteen to start work at a small firm in Southport.

Mum didn’t pass her 11+; she attended the local secondary modern school which had no provision for any academic qualifications to be taken.  She rues the lack of opportunity afforded her and other young people like her, “As a schoolchild I had not been thought worthy enough to have anything but the basic statutory education because at the age of ten I couldn’t pass the11+.  For all those pupils who had equal ability but not fortunate enough to be supported and encouraged within the family environment I think it is such a tragedy for the lack of personal growth and a lamentable loss to our nation’s advancement.”  At a primary level families seem to account more for outcomes than schools.”

(Liminal Leadership due for publication on the 17th October 2016)

Mum’s story of Barry, a boy in her class, which she told me over thirty years ago and I recount in Liminal Leadership, is a damning indictment of any system which lacks aspiration for all its children and young people.  Assessing ability with absolute certainty at eleven, so you can separate children into different systems, is not possible.  The children either side of the border line will change from day to day and paper to paper.  Rejecting many children at eleven will set in train a belief of failure that simply doesn’t recognise we develop and mature intellectually at different rates and times. Years later, taking the hard path, Mum and Dad both attained degrees and went on to teach.  Not surprisingly, they were part of a collective voice that brought comprehensive education to Southport.  I was educated at Christ the King RC School, comprehensive then and comprehensive now.  It wasn’t perfect but then no school is; I have much to thank it and my teachers for.

In accepting some schools are already selective via postcode or excessive faith requirements the answer isn’t to make matters worse by more selection.  Despite this, in an attempt to popularise grammar schools with voters, we now have the promise that every school will be given the opportunity to select pupils.  Fortunately politicians have a long history of requiring every pupil and every school to be above average, paving the way for a fully grammarised system.  Academies and MATs already seem consigned to the history bin of political whim. 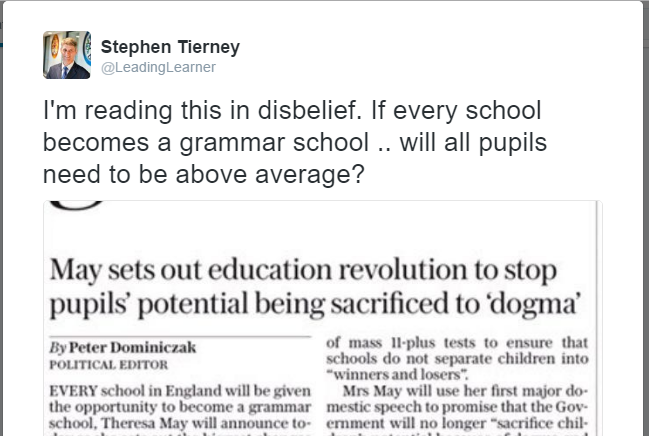 News presenters, journalists and pollsters get a positive response from people when they are asked about more grammar schools.  They would given the question asked but it’s the wrong question.  The system will limit the number of children in grammar schools and optimism bias makes parents think it will be their child who gets in.  The correct question, as it will apply to more children is, “What do you think about more secondary modern schools in this area and your child going to one?”

With so few children from disadvantaged backgrounds going to grammar schools currently (less than 3%) it’s particularly relevant to the aspirational working class that politicians seem to laud and appeal to these days.  The rose tinted glasses used to look back at the 1950s, 1960s and 1970s see grammar schools as the drivers of social mobility; an error of confusing correlation and causation.  The cause of the social mobility, in these decades, was far greater than a few people from disadvantaged backgrounds attending grammar schools.  It was rooted in a post-war society that was no longer willing to accept the prevailing status quo.

The rich man in his castle, the poor man at his gate,

God made them high and lowly, and ordered their estate.

Sadly, I can already hear a number of headteachers saying, “Why bother?”  Another straw on the camel’s back will lead to some announcing their resignation or retirement.  The storm threatening education, enough high quality leaders and teachers, will deepen and further increase in ferocity. 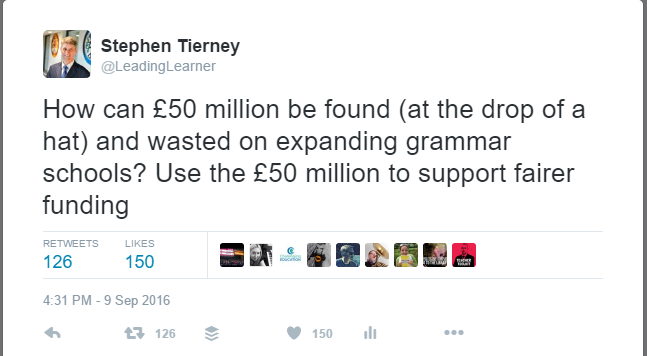 More grammar schools or any other change in school structure won’t answer the key challenges schools are facing.  If there’s a spare £50 million knocking about, add in an equivalent amount for Shanghai Mathematics (with no time for training), no more mad Troops to Teachers or excessive training bursaries to students who then decide not to teach; we could start hammering down the door of sufficiency that will undermine any proposed Fairer Funding scheme.  Putting my angst and bias all in a sentence; how has Blackpool, the most deprived local authority in England, ended up with some of the worst funding?

My only hope is that the fraught political path from Green paper to an amendment of legislation will scupper this madness.  Alternatively, another daft idea, which also never gets implemented, comes along.  Why do politicians keep making all these structural changes?  Because they can and they don’t know what else to do.  A suggestion: trust school leaders and teachers, stop wasting our time and so much public money and let’s focus on the quality of teaching and learning received by every child not just a chosen few.

« Teaching Touchstones and Mantras. What’s Yours?
Schools That Work for Everyone (teachers not included) #GreenPaper »

4 thoughts on “Exclusive: My Debt to Comprehensive Schools”