The previous post on Targets, Learning Gaps and Flight Paths looked at how targets should be used to generate “gaps in learning” between a student’s current attainment and future attainment.  It develops a line of thought that targets need to be agile, flexible and adaptable to take account students different flight paths.  Targets are not helpful as accountability measures. 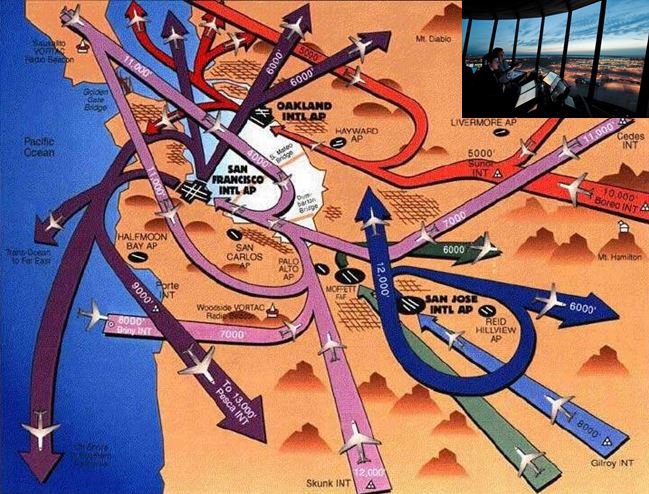 The tables take learning over an extended period of a year, key stage or whole school experience and break this up into convenient and often similar size chunks as a way of looking at expected or better than expected progress.  However, children don’t always do what we expect and it is important to pick this up during the learning process and either intervene to close the gap in learning or extend the targets to re-create a gap in learning.

The term “secondary ready” is often used to describe students who enter a secondary school with “a good level 4” namely a 4B.  Expected progress for these students, if achieved, takes them to a relatively secure grade C at GCSE.

However, the conversion rate from a level 4C, at Key Stage 2, to a GCSE grade C is 49% for GCSE English and 55% for GCSE Mathematics (2012 national data)and the expected progress  of three levels targets for students entering on a level 3 is a GCSE grade D which is not exactly aspirational or motivating.

Many schools are now looking to accelerate the learning of students in the first part of Year 7, that is deliberately change their flight path and trajectory, through targeted intervention.  Our whole school “minimum” target setting based on ten sub-levels progress, two sub-levels in each year from Year 7 to Year 11, needs to be re-thought in terms of students making more accelerated progress much earlier.

We need to intervene in Year 7, to change a student’s flight path, by deliberately seeking to address issues and gaps in learning, for those students who entering the College at levels 3B, 3A & 4C.  This can help redirect them towards a flight path to achieve a 6B at the end of Year 9.  Maybe 6B should be renamed the new “Key Stage 4 Ready” level as the conversion from a 6B at the end of Key Stage 3 to at least a GCSE Grade C is very high.

To achieve this we have introduced “Passport Maths” from the National Mathematics Partnership for students in the Christmas Term of Year 7, likewise with a new Literacy Intervention Programme.  We wait to see what the impact will be.  Due to “losing” our additional teaching capacity, an extra Mathematics teacher and English teacher, one to maternity leave and one to a late external promotion, we are looking to increase capacity with Numeracy & Literacy Intervention Supervisors who will be taking small groups (3/4 students) a few times a week to accelerate the students’ progress.

Building on the idea of “Passport Maths”, why not introduce Passport Science or RE or History or Geography as part of the teaching programme in the first term of Year 7 with a supporting focus on developing literacy, numeracy and learning skills.

We may also need to think again about flight paths for the more able as even our four levels progress that targets a student at level 5A on entry towards a GCSE A grade may not be sufficiently challenging or aspirational.  What would it look like if we challenged these students to make an extra sub-levels progress per year by changing the Key Stage 3 Curriculum to increase the rate of expected learning and our aspirations for these academically able students.

Most of the e-mails and comments I have received on the previous blog post Targets, Learning Gaps and Flight Paths were from PE teachers who wanted to know how to approach flight paths for their subject using English or Maths Key Stage 2 scores as a baseline.  Exactly the same issue was discussed at St. Mary’s last October when we discussed them during a CPD session.  These were our thoughts:

The number of targets, at the various levels, at the end of the key stage should be identical for PE and the Creative subjects as they are for the academic subjects.  Outcomes matter so no lowering of the bar.

PE and the creative subjects could produce their own baseline for students at the beginning of Year 7.

If you’ve not read Chris Hildrew’s blog post on “Assessment in the New National Curriculum: What We’re Doing” it is well worth looking at but hopefully the idea flight paths are linear we can begin to put to one side.

The new draft national curriculum lacks much of the national element that is associated with the current one, in particular the removal of levels though how national these were is a moot point anyway.  This will create a different environment in which we operate but possibly provides an opportunity for us to develop an individualised curriculum for our students – Charles Handy suggested that this would be a better idea than a National Curriculum over twenty years ago.  The thinking that underpins the flight paths, and good assessment generally, will become a critical part of our professional understanding in the years ahead:

It’s all Joyce Matthews’ (@passionateaboot) fault as she set off a lining of thinking, at least I think it’s thinking rather than just plain madness. 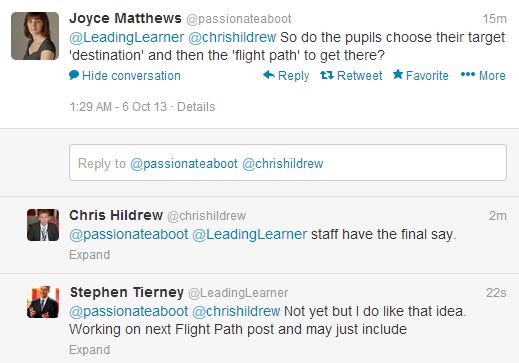 What would it look like if students took control of their target setting process having totally understood the idea of flight paths and had a good working knowledge of the flight paths available?  Now this fascinates me as we are moving into the realm of metacognition and self-regulation which is the place where micro personalisation really occurs.

The previous post on flight paths proposed “agile and flexible” targets which operate at the classroom level and are negotiated by students and teachers.  What would happen, if alongside the school’s computerised target setting system, students tracked their own progress against a certain flight path:

We are entering a different World!

If your concerned that metacognition & self-regulation is scientific nonsense for tweed wearing enemies of promise, have a look at this:

If you are interested in personalisation there are a series of posts that develop the idea, from macro to micro-personalisation, below:

Vision 2040: Learners at the Centre I

Vision 2040: Learners at the Centre II

Vision 2040: Learners at the Centre III

« #Vamoose and #Skedaddle by @TeacherToolkit
Pupil Premium Analyser and Tracker »