Lesson Study: 3 heads are better than 1

This is our first fully completed lesson study.  A rather proud moment.  Thanks to Abby, Helen, Rachel & Sarah for their great work on this.  They are now the mentors for future lesson studies that are up and running.

After completing the collaborative process of NTEN’s Lesson Study, the final piece of the jigsaw is the write-up, a final chance to reflect upon its effectiveness and to ask: are THREE heads really better than one? Lesson Study is a Japanese model of teacher-led research in which a triad of teachers work together to target an identified area for development in students’ learning  participants collaboratively research, plan, teach and observe a series of lessons. Then, using ongoing discussion, reflect and refine their interventions.

Let’s Start at the Start

The first, and most crucial, step onto the Lesson Study ladder is defining the enquiry question which we wanted answering.  So we asked ourselves, what issue or concern are we currently facing in our classrooms? The answer was (as is the case year after year if you believe the headlines in late August) underachieving boys.  However if you have ever looked into the Lesson Study approach, it becomes obvious that the enquiry question needs to be tight and focused in order to drive the process. So, we knew that simply posing the question ‘How do we improve results for underachieving boys?’ just wouldn’t cut the proverbial mustard.  After researching current pedagogy, and agreeing on a tool which we all wanted to develop, we fine-tuned the question to a much more narrowed:

“How effective is flipped learning at improving results of underachieving boys in Year 10 Geography?”

So, we had our question and with this, alongside a little apprehension of stepping into the unknown, we continued the process.  The next rung on the ladder being…

Now, this was new to us as teachers, not the actual act of planning collaboratively (we are a friendlier bunch than that) but actually planning a lesson together that was to be observed by us, the planners.  It was so enlightening.  We all reminisced about times when we had had an observation within our classrooms previously (outside of the Lesson Study) and the observer had in fact voiced that ‘it’s the students being observed, not you as the teacher’ and what we heard was ‘get your best teacher voice ready, it’s time to take to the stage!’  But this process was truly different, it wasn’t lying to us … it REALLY is the students being observed, not the teacher, and so, all of a sudden the whole process became safe. And not safe as in boring and predictable, but safe to take measured risks in order to improve our teaching as professionals, safe to improve instead of being simply judged, this was a ‘safe’ which was going to inform our future practice, and so instantly, we became excited.

We planned a series of lessons together which incorporated the flipped learning approach and predicted what would be the effect on our selected underachieving boys.  Another preliminary task was to identify three students, who the baseline data suggested were underachieving, who we would observe as our focus throughout the approach.  Unfortunately, we were not short of ‘victims’ as it became apparent that many of the boys in the GCSE Geography class (and that’s not persecuting Geography as data suggested this was a problem across the curriculum) were in fact underachieving. So, we had our collaborative lessons planned, we had our three identified students to observe, and we were ready to go into action…

During the observation, the designated teacher taught the lesson which we had collaboratively planned and we covertly observed our three identified underachieving boys.  We focused ourselves on specifics:

Directly following the lesson, we also interviewed the three students, a crucial step suggested in the Lesson Study timetable, to gauge their response to the intervention.  This proved to be an invaluable part of the process, as those who work closely with students know, teenagers won’t tell you what you want to hear, they’ll tell you the truth!

We repeated the above three times (collaborative planning, conducting the lesson, student interviews, follow-up discussion) in order to gain some live data which could answer our enquiry question:

How effective is flipped learning at improving results of underachieving boys in year 10 Geography?

Through repeating the process it allowed us to fine-tune our practice in order to work through any obstacles which we came up against.  For example, in our first attempt, a problem which we encountered was the fact that the underachieving boys had not actually completed the home learning (a crucial element in the flipped learning approach) and so we had to think around this issue in order to move forward.  Having talked to one of our colleagues in the Modern Foreign Language Department, she demonstrated the RAG model she uses when flipping her classroom.  A test at the beginning of the lesson, to assess students’ level of knowledge from their home learning, puts them on to one of the pathways. 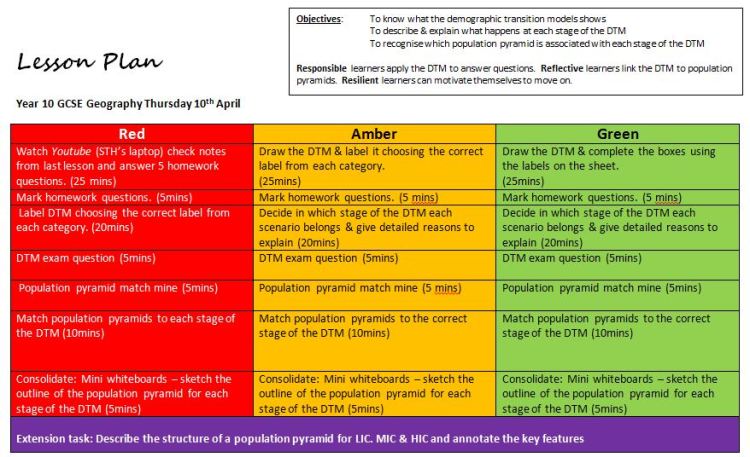 Interestingly students’ behaviour changed with respect to home learning as they didn’t want to be assigned to the “loser’s pathway”.  We implemented this in future lessons, which proved successful as it meant that students could work inter-dependently and at a differentiated level throughout the whole learning process.

On completing the Lesson Study timetable to this point, we were left with our final act: to reflect.  We had a wealth of elements to analyse and evaluate: student answers during the interviews; baseline data versus most recent data following the intervention lessons; our observations of the students’ learning; and results of our discussions and collaborative planning.

The quantitative data revealed … success.  All of the three underachieving boys improving their attainment by at least one grade in the assessment which followed the intervention when measured against the baseline data. 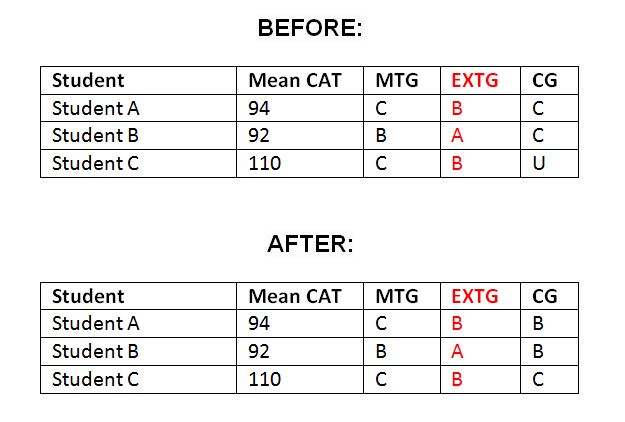 The qualitative data revealed … success.  Both our and student feedback was overwhelmingly positive: students recounted that the intervention of the flipped learning approach aided them in their progress as learners and for us the Lesson Study model had proven itself as an effective approach to continued professional development.

We as teachers unanimously agreed that this approach to observing lessons gave observations a real purpose. We all improved our professional practice by actively engaging in the process. So much so that we felt the need to…

Dissemination was vital to us as a small working group.  We had found the Lesson Study process invaluable and so we were compelled to ‘spread the word’.  Luckily for us, enthusiasm amongst staff was high and each of us was able to work alongside a new triad of teachers (in a mentoring role) as they too engaged with the timetable of the Lesson Study.  It is an approach which originated in Japan in the late 1800s, but for us as leading practitioners in education; it is at the forefront of our professional development toolbox; a way in which future lesson observations can actually promote improvement in our teaching and learning.

And so, we had an answer to our question … three heads really are better than one.

The following two blog posts on flipped learning are from Samantha Broom (@spanishsam):

The Flipped (and Differentiated) Lesson