For many of us #SLTChat on a Sunday evening has become an addictive part of the weekend.  It is often an action packed and adrenaline fuelled outpouring of tweets and ideas with some of the most rapid sharing of practice you will ever find.

The most popular question on the 22nd September, hence it was topic 2, is below:

Last academic year I ran a session on outstanding teaching & learning for staff.  An early part of the CPD was focussed on unpacking the idea of measuring “progress over time”.  The basic idea is that students who are taught well make more progress than those who are not.  It seems a reasonable assertion to me – teaching and teachers matter particularly teaching and teachers that have a big impact on students’ learning.  Converting three levels progress from Key Stage 2 to 4 (at and above national averages equates to Ofsted Good) and four levels progress (at and above national averages equates to Ofsted Outstanding) into smaller chunks has led many schools to think in terms of “flight paths” hence my tweet below: 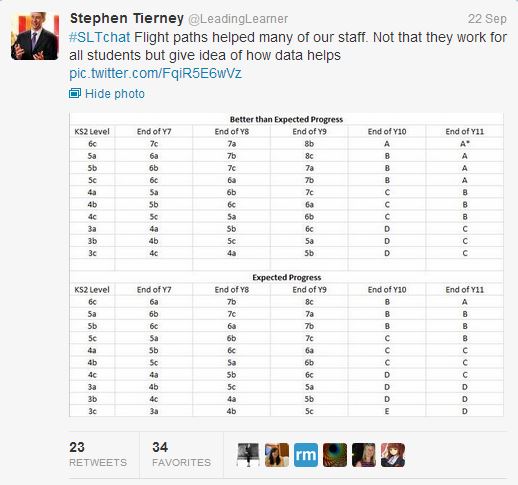 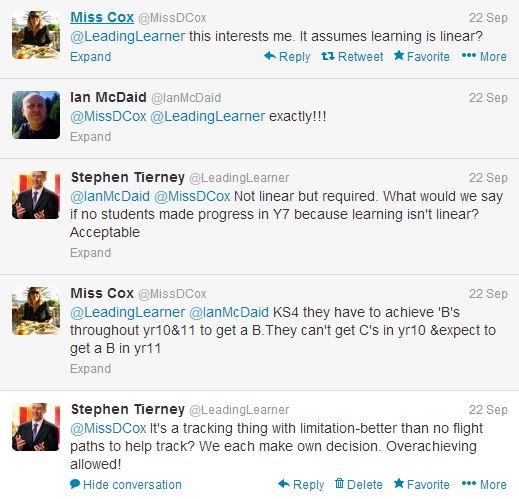 However, over a year, key stage or whole primary or secondary school education the peaks and troughs of non-linear learning need to lead overall to a student making good progress.  This is what I would want for my own children and so this is what I want for all students at St. Mary’s Catholic College and Christ the King Catholic Primary School. 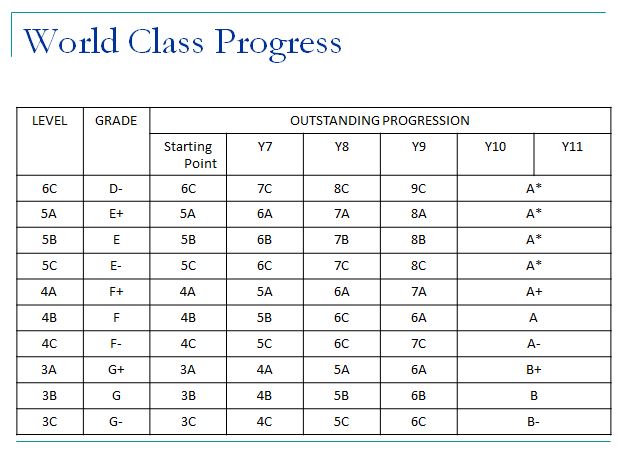 For students making two sub-levels progress a year, good progress in a secondary school, the “flight paths” look like this:

Please note:  The ten sub-levels over five years rather than nine sub-levels (three levels progress) was introduced because it was just simpler mathematically to model.

The interesting challenge is, “What would we have to do to help students progress, on average, a sub-level per term instead of one sub-level per term and a half?”  As you can see impact over five years is impressive.  Out of this INSET has come some petty honest discussions with ourselves about the Key Stage 3 Curriculum which just wasn’t demanding enough of students and leading to a lack of progress.  The fruits of these discussions are still being worked on and we are giving considerable time to a radical overhaul of Key Stage 3 to substantially increase the level of challenge and we hope in turn progress.

Accountable Against Outcomes Not Targets

One of the key mind shifts needed, if we are going to make effective use of targets, is to not hold teachers accountable against them.  This is not some tweed wearing, left wing, enemy of promise approach to education.  Schools, and the teachers within them, need to be held accountable for the outcomes achieved by students, for example, what percentage of students made three, four or even five levels of progress from Key Stages 2 to 4 or in primary schools two or three levels of progress from Key Stages 1 to 2.  Rather this is a reframing of our use and understanding of targets.  Targets should be used to create gaps in learning, outcomes are for accountability.

Targets need to be agile, flexible and adaptable to ensure there is always a “gap in learning”.  The gap in learning is produced by having a target that is always in advance of the student’s current attainment.

These are targets linked to learning intentions and determined at the classroom level.  They form a part of all effective teachers’ repertoire, whether they think about it in these terms or not.  “Where are you up to now?”  “OK, this is where to next … (agile target setting).”  The teacher now works with the student to fill the gap in learning created by the new learning intentions.  A simple example of this in action is formative assessment with a student expected to respond to the feedback by producing a new improved piece of work at a higher level.  The teacher will then set a new target for the student to create a further gap in learning between her/his current attainment and future attainment.  This continual revising of the learning intentions between teachers and students is linked to the use of “agile targets”.

These I tend to think of as numerical targets that are renegotiated by teachers as part of their work with students over an academic year.  If a student reaches their end of year or key stage target early then there needs to be a re-establishing of a gap in their learning by an extended target being set.  This makes allowance for the non-linear nature of learning with students making more rapid progress than expected acquiring new targets mid-year or key stage.  The term “flexibile target” indicates that targets may indeed change over time – that gap in learning between current and future attainment needs to be maintained – but it is not a lesson by lesson or within lesson change as discussed above.

When targets are set, often at the beginning of Key Stage 2 or 3 or 4, which students prematurely achieve, due to their accelerate progress, there needs to be a resetting of targets.  To repeat myself the gap in learning, between current and future attainment needs to be reset.  This can be part of a formal process.  After the INSET last academic year we determined that we were going to set targets for students that would lead to outstanding outcomes which look like this: 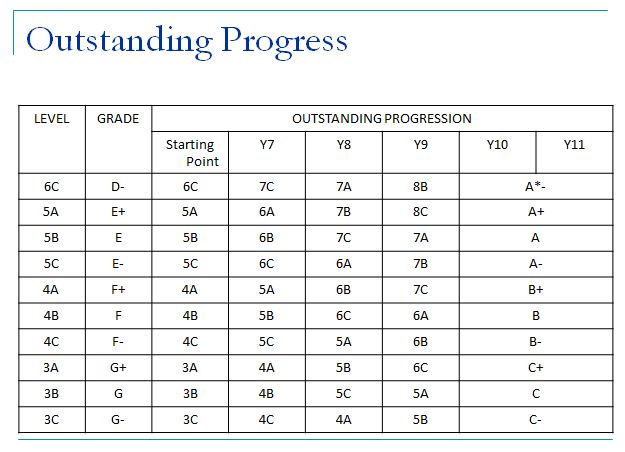 If a student actually managed to overachieve against these targets then at the beginning of each academic year they are formally reset.

A student joining us in Year 7 on a 4B will be targeted a 5B by the end of the year.  However, if s/he makes four sub-levels progress thus achieving a 5A then their targets for Year 8 and onwards will be revised upwards.

I have a sense, if you’ve read this far, that this is one of those love it or hate it type of posts.  Trying to straight jacket people into a statistical model doesn’t always feel that comfortable but I believe we do need a way to review whether the progress being made by students is acceptable or hopefully better than expected.  Targets are important but they need to be linked to the creation of gaps between current and future attainment not accountability.

There is more to add to this idea of flight paths, as there are nuances, linked to “Changing Flight Paths and Interventions” which considers early intervention in Year 7, challenging the most able and how students & teachers can take the lead on using personalised targets and flight paths within the learning process.

Whilst this is still one of my most popular posts there is some new thinking that may be of interest in DIY Teaching CPD: Structure and Sequence