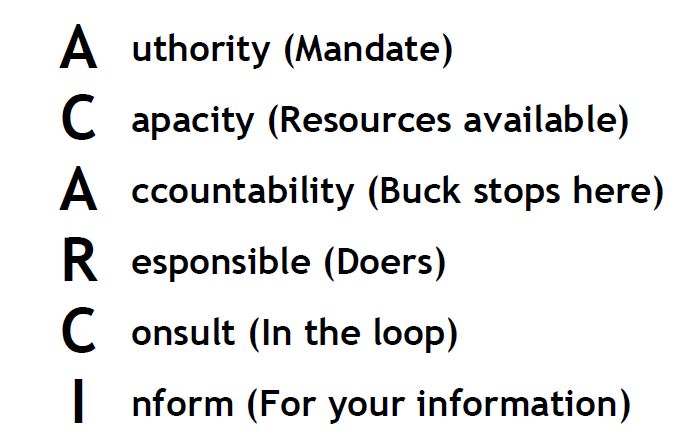 In a conversation with a headteacher colleague and friend, a number of years ago, she mentioned that she had established quite a distributed leadership style.  She had my attention and interest and I wanted to know more:

“Any member of staff can come to me to discuss an idea they are interested in implementing and if I think it has merit I allow them to get on and do it.”

It begs the interesting question, “So what happens if you don’t like the idea?”

“Well I counsel them give them alternative suggestions and then allow them to go away and think about it and then come back to me.”

I had a sense where this might be going and couldn’t help but keep pushing the point … in essence the member of staff would be “counselled” as often as required until s/he came back with an idea the headteacher liked or had already thought of!  It still makes me smile when I think about it.

The Challenges of Distributing Leadership

Distributing leadership is not particularly easy for those of us who have “control freak” tendencies.  For those who don’t it still provides a challenge because if something goes badly wrong the problem is more likely to end up as an issue for the headteacher to resolve than anyone else.

What would you do if one of your team or member of staff came up with an idea that you didn’t like but was aimed at solving a particular problem?

If you allowed them to implement the idea, what would you do if the whole thing went horribly wrong?

What would you do next time they came up with an idea you didn’t agree with?

The challenge of these questions is this, unless you accept people may have a different path to the desired outcome, allow them to follow it and back them when things don’t quite work out then they are not really leading and may never choose to lead again.

Good leadership is a learnt art with the ability to make right decisions at its core.  We’ve all made mistakes and needed the opportunity and support of others to sort them out – this is part of our development as leaders allied with the opportunity to lead again.  I’m not advocating that stupid ideas or high risk strategies are employed, this would be negligent, just trying to show how hard really letting go is.

In 2008, we engaged as a senior leadership team with a consultant from Hay Group in what was some of the most formative professional development I’ve ever had.  By the end of the first day we had concluded that we weren’t actually a team at all.  We decided that we were a group of pretty capable individuals all working in silos with me pulling the strings but never really letting go.  Trying to lead and manage in this way was nearly killing me and I had sensed for a number of years was holding the College back.  I simply wasn’t releasing the professional capital within St. Mary’s. 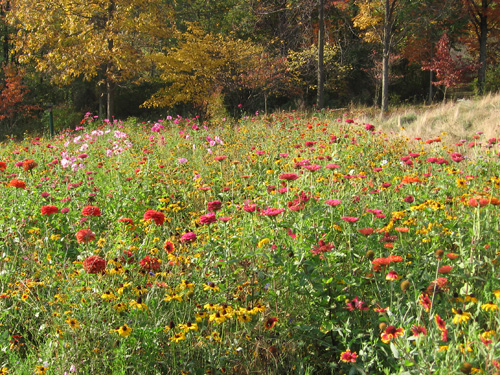 Distributing leadership is not about letting a thousand flowers bloom with nine hundred and ninety nine then withering.  It is a highly disciplined approach to leadership that permits schools to focus on a few high impact priorities with decisions being taken at the level closest to the point of implementation.

Clarity is the Key

I’ll never forget the meeting where we were discussing who was leading what element of the College’s development plan.  I asked the simple question, “So, who’s leading deep learning?”  Nobody knew.  It was one of my moments of greatest incompetence and trust me there have been a few!

Over the coming months we looked at establishing systems and processes for distributing leadership that meant me really letting go.  For a recovering control freak this is a pretty scary place.  We established College Improvement Groups (CIGs) and “CIGlets” which were smaller College Improvement Groups focussed on a particular issue.  The only person who couldn’t attend these groups was me – the decision was a deliberate one both symbolically and practically.  Don’t put leaders from the Control Freaks Anonymous Group in places where decisions are to be made.

The disciplined mechanism by which we approached distributing leadership was the development of our ACARCI Model.  This gives leaders the authority and capacity to lead whilst holding them accountable and is based on Hay Group’s view of leading: 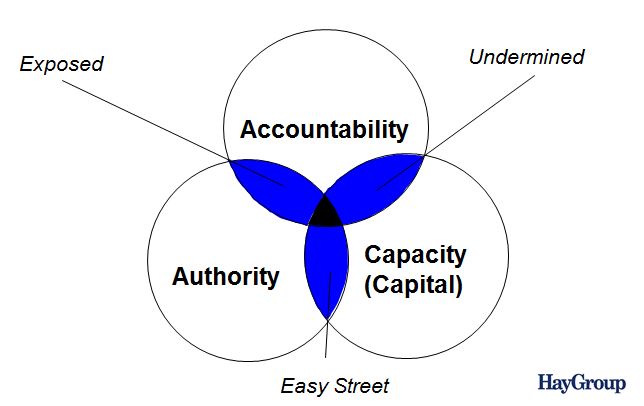 As part of the authority to act a clear mandate needs to be given to the leader of a particular development, issue or project.  The full extent of the leadership role and any limitations must be explicit as without it the leader ends up undermined as people question their authority to act.  This can all too easily happen.  These were the different mandates we put in place and what we meant by each one:

Over time it became increasingly obvious that the mandate that we used most was the facilitation mandate.  In fact the delegated mandate was essentially a product of a person’s role or job description.

The determining of the resources available, particularly with respect to staff and time, is likely to limit the number of developments/issues/projects that can be taken forward at any one time.  It should, however, also ensure that those developments/ issues/projects which are prioritised have a better chance of being successfully implemented and have a greater impact.  Without the resources required a leader very quickly becomes exposed, out on a limb, without the capacity to get the job done – time always seemed to be the critical one for us.  We too often set off with the mentality that “we can do this as well” only to find that it didn’t actually happen.

In determining an individual/team’s ability to successfully take forward a development/issue/project the following should be assessed:

One person must be held to account overall for ensuring the development/issue/project successfully meets its goals.  The person must be clear, from the outset, how s/he will be held accountable, to what timescale and what on-going monitoring will occur, for example:

The method chosen must balance the needs of the organisation to manage initiatives whilst limiting unnecessary and unproductive bureaucracy.  Where accountability is missing a leader ends up on “Easy Street”, as whether the project is successfully brought to a conclusion doesn’t really matter.

In terms of accountability it is important to remember only one person should be named as the leader.  Ultimately, s/he has the final decision on the way forward if ever the team is unable to determine how to progress through consensus.

The “doers” need to be clear who they are, what is being asked of them and the timescale for any actions.  It may help to go through ACARCI with each “doer” so that they are comfortable and confident in their role.

Consult (In the loop)

There will be a need to balance manageability with wide and inclusive consultation.  The questions are who, when and how?

Inform (For your information)

There may be various stages during the development/issue/project that groups of people may need to be informed of progress, actions and decisions.  We also need to increasingly ensure that we explain why things have been done.

Here is one of our early attempts with a PDF copy you can download below it: 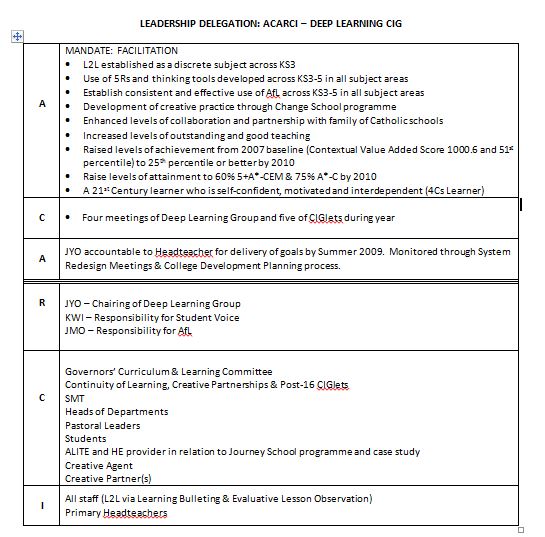 Over time this approach has actually changed how we function as a team and Colege.  Initially, it was quite amusing how often senior leaders would just check their thinking with me.  They were keen as mustard for me to allow them to make decisions, everyone always seems to be, but the reality of true leadership and accountability is a big challenge.  I worked hard at never telling them what I thought about their decisions but got them to reflect on whether there were any other options and the pros and cons of the different possibilities.  They had to make the final decision as they were the leader and they were accountable.  Now things have come full circle and they remind me of my mantra “there’s only one leader” for a particular aspect of the College’s work, when I try to stick my nose in, so the final decision is theirs not mine.  I would now only intervene if an action was against the vision or values of the College.  This has never happened.

We soon realised, when filling in the ACARCI, if we agreed the authority, capacity and accountability as a team then the responsibility, consultation and informing sections could be sorted by the person leading.  In short we only completed the first three sections once we had gained more experience of attempting to distribute leadership.

A copy of a blank ACARCI form for you to download is below:

Distributing leadership isn’t a universal panacea and there are certain times when other leadership strategies may need to be employed.  However, if a school develops and persists with an underlying strategy of distributing leadership then the utilisation of the talent within the school will be enhanced and future leaders will be grown.

« Becoming a Self Regulating Profession
#5MinResearchPlan by @LeadingLearner and @TeacherToolkit »