Dear @HarfordSean HMI (via Ofsted), Thank you for asking …

Another promise to myself has come and gone in the blink of a tweet.  I had promised myself no more blogs about Ofsted but then Sean Harford HMI and Ofsted’s National Director for Schools went and tweeted this:

Thank you for asking what will be an increasingly important question given the number of headteachers who are about to retire or will be retired early following today’s Queen Speech.  If I may take the liberty of rephrasing the question it will help me frame my response.

The question could read, “What could Ofsted do to incentivise you to take on the leadership of a school which is highly likely to have an intake of children whose attainment is well below average with disproportionately high levels of social disadvantage where domestic violence, poor mental health, alcohol or drug dependency and parental unemployment are sadly part of children’s daily lives.  The schools are likely to be up North (Ofsted’s own data suggests it’s grim up here) and in a coastal, rural or inner city area with a large percentage of children from the hard pressed living group in it.”

Obviously I’ve exceeded 146 characters so possibly not a great suggestion but you get the idea.  Hopefully my suggestions will improve as I write.  I promise not to have my usual rant about Ofsted’s judgement being neither a valid measure of a school’s effectiveness nor having any idea of whether they are reliable or not.

As the eternal optimist, I think you’ve currently got a lot of current and aspiring head teachers with their hands in the air saying, “Let me, I’ll do it.”  We are driven by a social conscience, a moral purpose and a desire for a fairer society.  I don’t think that politicians involved with education, Ofsted or inspectors ever meant to become drivers for greater social inequality but that is what they have increasingly become.

Please don’t take this personally; it’s a system problem which is also a global problem.  I know you will have taken time to read the blog post from Daina Ravitch, based on the work of Professor David Bloomfield, that I cc’ed you into yesterday about the “Myth of Failing Schools”:

“Schools with low test scores usually reflect a concentration of students who enter the school far behind, who have disabilities that interfere with learning, who are English language learners, or who have other obstacles to overcome. The “failing schools” tend to have more of these students than other schools. Bloomfield writes that it was the policy of Mayor Bloomberg to close schools with low scores, as if this were a solution to the problems of the students. The students from the closed schools were sent to other schools that then became “failing schools.”

It may be that a number of the schools currently identified by Ofsted as requiring improvement or put in to a category are anything but failing.  They may be doing profoundly good work but the current metrics, used by Ofsted, simply won’t show it.  A great example is the floor targets.  Imagine a headship comes up in a grammar school or a school in a very affluent area with a socially advantaged very able intake and another headship in a school in a deeply deprived area which has never been above floor targets.  You know which one you want to lead but you have a mortgage, a family to support and only one life.  It’s just about impossible to get a poor grade from Ofsted as a grammar school and so you make your decision.  The disadvantaged have just become more disadvantaged by your choice.  You take the grammar school job, become an NLE and at least console yourself by going and visiting schools in disadvantaged areas, for a few days a year, and tell them what you would have done or they should do.

I’m feeling much better now so thank you for reading so far.  In fairness for your time in reading this I better actually try to offer a few suggestions to the question you posed.

There needs to be agreement on what is an equitable and fair measure of a school’s effectiveness.  For the foreseeable future the only metrics we have are those linked to outcomes from SATs, GCSE and A-levels.  The measure chosen needs to be one which is inclusive, offers a broad, relevant curriculum to children and isn’t open to gaming, well very much that is.

Using the current value added measure, for secondary schools, based on the best 8 including English and Mathematics, would seem a good starting point.  This will soon morph into Progress 8 so there is an element of continuity.  Attainment pass rates and levels progress both favour schools with higher ability intakes – fancy getting a group of 5a on entry pupils to a grade B at GCSE or a group on 3c to a grade D?  No comparison.  Goodness knows what you will use to judge primary schools as there is nothing currently which fits the bill.

The problem with all these metrics is that success is limited.  Not all schools can be above average as some numpties keep suggesting.  Professor Tim Oates recently suggested, given the volatility of examination results, that a school should be judged on five years of data.  One to think about possibly?

There is sometimes a feeling that there are so many things you can be tripped up by that an inspection team will get you in the end, if they want to.  Confirmation bias kicking in for schools who are in the most challenging areas?  Keep inspection looking at the big picture and leave school leaders to sweat the small stuff.

“Chart 8 (on page 6) takes a different approach to previous charts and shows the performance of pupils at GCSE level within schools rather than across different schools.  This shows the real problem with our education system.  Children from poorer backgrounds perform worse than their wealthier peers whichever school they are in.”

If you want to get really radical and believe that effective schools are randomly distributed across the system, why not divide schools in to deciles based on their intake’s prior attainment and then look at the performance of them relative to others in the same group – that might put an end to any coasting going on!  It may cause flight from schools currently graded good and outstanding to those who are RI or in a category.  Hey presto, mission achieved.

This is one of those massive issues that until we get much closer to “the right answer” any attempt to improve the inspection system will be thwarted.  Maybe it’s simply time to stop inspecting schools in the way we currently do – time to move to peer review rather than waiting for ten years? 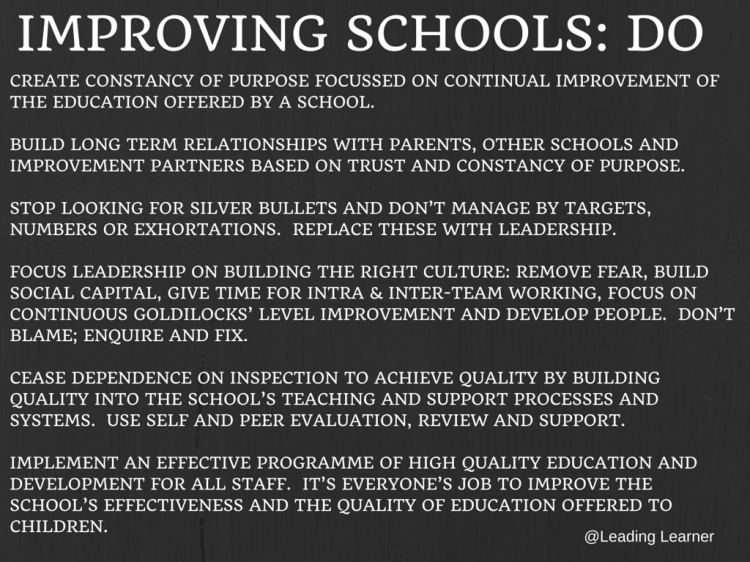 No More Grades, Narrative Reports for all Schools

In the belief someone actually read my response to Ofsted’s consultation on the new framework, just a quick summary here.  The move to a narrative report I thought was a great idea but should be applied to all schools – give us a grade and we ignore the advice, it’s the insights which help lever improvement.  The individual grade, for different sections, was always a bit bonkers as everyone knew they were referenced back to the outcome of SATs, GCSE or A-levels.  It would be good for you to sort this in the new framework about to be published.  Clearly the style in which the narrative is written will be crucial.

In the spirit of inverse intervention, if the value added data is positive over a number of years, or isn’t consistently in the bottom quintile/quartile, don’t bother visiting the school.  A nice letter will do nicely.  This should allow more regular support for other schools who need additional capacity.

If You Take Them In, You Stick with Them

The evidence about whether inspection leads to school improvement is so inconclusive and nuanced we probably don’t really know its impact.  It just sounds good to some people to talk about sticking a school in a category and then never both staying around to see the chaotic aftermath.  I lost a good friend and head teacher colleague to an inspection team who refused to accept the school’s improvement journey or the data they were presenting … she lost her job … and yes you’ve guessed it, the school got record GCSE results a few months later just as she predicted.  Sadly, after her departure the school went backwards and has now closed.

A lead inspector needs to see their visit to a school, which may need additional support, as the first step in an on-going relationship and behave accordingly.  If the school does not have the capacity to improve but needs significant support the inspector stays with it.  S/he is now the school’s advisor, advocate and school improvement partner.  First job will be to find another similar school which is willing to offer support over an extended period.  Set up a process of peer review, which they validate, and begin to help build the internal capacity needed for the school to improve.  With education cuts coming Ofsted must be an unequivocal force for improvement and a more cost effective one than other possible school improvement strategies.

Give Time, It Takes Time

There needs to be a shift of resource from inspecting to improving and this will take a lot of time from and effort by the inspectorate and increasingly fellow head teachers.  The quick fix, drop a super head in for a few days, weeks or months has been tried and failed.  The challenges faced by some or possibly many requires improvement schools or those in a category are simply too complex to be solved overnight.

In time a school may opt to join a local cluster of schools, possibly via a hard federation or multi academy trust, to gain additional capacity.  No more boom and bust solutions, just a steady, consistent and continual journey towards greater effectiveness.  The children in the school at the time and those that will attend in the future deserve this and need it.

I couldn’t help notice that your tweet was at 5:47 a.m. this morning.  I do hope it was one of those scheduled ones.  If not, you’re working too hard.  Even Ofsted inspectors should be allowed a work life balance.  Thanks for reading this, if you’ve made it this far.

« The Emperor’s New Clothes: Tales from the Frontline
Assessment Without Levels Is Built on Trusting Teachers »

10 thoughts on “Dear @HarfordSean HMI (via Ofsted), Thank you for asking …”