This is the first draft of my letter in response to the Government’s consultation on Coasting Schools.  If you’re given an opportunity to have a say I think as a profession we should have.  A copy of the letter is available in Word at the bottom of this post if you’d like to send something similar in or if you disagree with the contents please pen your own.  The deadline is the 18th December so please write in alongside your Christmas cards. 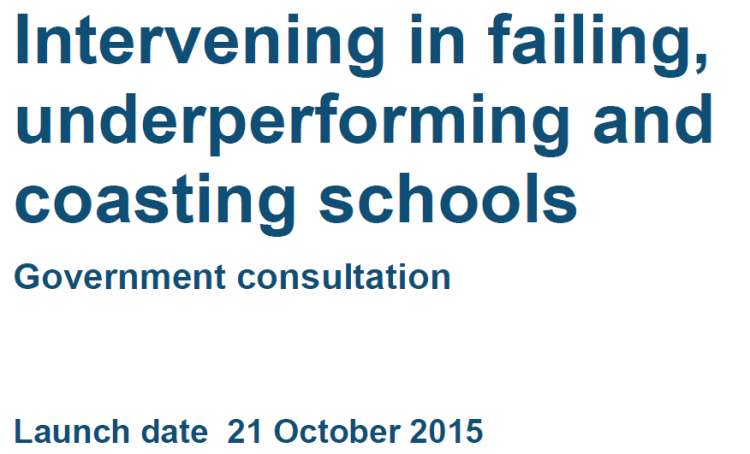 Thank you for the opportunity to comment on the intervening in failing, underperforming and coasting schools consultation.  The consultation comes at an opportune moment for the further development of a school led system when consideration may be given to the wider accountability framework in which schools operate.  This framework is potentially becoming overloaded, confused and creating perverse incentives.  There is an opportunity for a forward thinking government, committed to social justice, to create a staged, proportionate and effective accountability system as part of establishing a World Class Education system for all children and young people.

A prerequisite for the redesign of the current accountability system is the implementation of an annual external audit of Safeguarding within all schools.  The issues of neglect, abuse and countering extremism are likely to be perennial issues for society.  Schools have a crucial part to play in addressing them.  Currently Safeguarding checks by Ofsted do not happen for new schools in their first two years of operation, with new governance arrangements, and for many schools there will be at least three and possibly many more years between inspections, unless a qualifying complaint is made.  This stands in stark contrast to the audit processes required to secure the safe and appropriate use of public money used to fund schools.  I would urge the Department for Education to move, as soon as possible, towards the establishing of a legal or funding requirement, for all schools, to have externally audited high quality and secure Safeguarding systems, policies and procedures in place.  The audit process could initially be established by Ofsted with the on-going external audit capacity provided by Chartered Safeguarding Officers in a system akin to finance with its Chartered Accountants, who have professional standards and a code of conduct to adhere to.

With the rigorous on-going audit of Safeguarding established and significant data now available on schools’ performance, much of it in the public domain, there is the opportunity to move from a model of universal inspection to one which is significantly more targeted.  With public funding under continued scrutiny there is little value for money in inspecting schools where the academic performance is clearly good.  This may also be an opportunity to reduce the excessive level of data, some of which is replicated, in RAISE, the Inspection Dashboard, the Data Dashboard and Performance Tables.  One sufficiently but not overdetailed public set of data could be provided to schools and parents with schools able to purchase additional more detailed data analysis if they felt it necessary.

For over twenty years school leaders have raised concerns about the validity, reliability and inconsistency of the inspection process and it is far too dependent on the actual inspection team and their interpretations of what they see in a very short visit to a school.  The proposal within the consultation for a clear transparent measure based on published performance data over three years is to be welcomed  so long as this is based on a suitable progress measure.  This would remove any doubt about whether a school is underperforming or not.  The suggestion within the consultation that Ofsted inspectors are able to recognise schools on the cusp of change, either an upturn or downturn in future educational standards, would seem to be inconsistent with the evidence provided by the recent Education DataLab and FFT Aspire (2015) Floors, Tables and Coaster: Shifting the Education Furniture in England’s Secondary Schools Report.

The new Progress 8 measure at a secondary level has much to commend it.  The proposed progress measure for primary schools may be equally valid as a way of assessing the effectiveness of a school’s impact on their pupils’ learning.  The proposal to have an attainment measure, for example 60% A*-CEM, should not be taken forward as it disproportionately protects schools with high attaining and affluent intakes with the converse impact of those schools with lower attaining and disadvantaged intakes.  This will reinforce the message that irrespective of intake a school can be deemed to be highly effective or coasting based on its impact on pupils’ learning rather than the current system where judgements appears to benefit schools with more affluent higher ability intakes.

In terms of the actual definition of coasting it may be worth giving consideration to identifying schools that for three consecutive years have a progress measure in the lower quartile.  If the education system improves, over time in England, this may be revised to the lowest quintile of decile producing an ever greater focus on schools where pupils are making the least progress.  All schools above this level of performance should be trusted to determine and broker their own improvement journey without fear of or hindrance from external inspection.  Whether reasonable from the outset or as part of the evolution of the system it may be worth considering grouping schools with similar intakes together, based on attainment of intake or the levels of disadvantage, before identification of the lowest quartile, quintile or decile.  This would mean that where models of good practice are identified they may be contextualised and used as the basis for collaborative practice where schools may learn from similar schools.  Further the proposal that “Accountability Systems Must Serve the Interests of Children First” in the Education DataLab and FFT Aspire (2015) Floors, Tables and Coaster: Shifting the Education Furniture in England’s Secondary Schools Report should be introduced to challenge the practice of a very small minority of schools who manipulate their results upwards through the exclusion of pupils.

Ofsted’s remit could then be amended so that it has responsibility for schools whose progress data shows a level of underperformance for two consecutive years.  The inspectorate should be required to ascertain potential reasons for the underperformance, reporting to the headteacher, senior leaders and governors their findings.  HMI would use their system knowledge to make suggestions and broker opportunities for engagement with high performing similar schools to enable improvements to be made.  Where the performance of a school falls below the standards set for a third consecutive year the Regional School Commissioner will be able to make a decision informed by a series of HMI reports compiled over time and the knowledge of HMIs involved as to whether changes in governance are need if standards are to improve.

In short, this is an opportunity for the Department for Education to give clear policy guidance within a framework involving targeted Ofsted Inspections when necessary and informed decision making by Regional School Commissioners about the most appropriate means of school improvement, including an option for changed governance when required.  This system would provide the basis for a wider debate about whether national policy on school accountability should include metrics which move beyond the purely academic.

A copy of the letter is available for you to download and send, adapt or rewite as you choose:

7 thoughts on “Coasting Schools: A Letter to @NickyMorgan01 and @NickGibbMP”