The Implications of GCSE Changes on School Accountability

At the start of the week I was asked to present to a group of people from the Diocese the changes at A-levels and GCSE.  The A-level changes whilst having massive implications for workload, being brought in at the same time as significant GCSEs for some inexplicable reason, are relatively easy to understand.  However, the numerous changes at GCSE are of a totally different order in terms of understanding and implementation; not helped by delays in publishing syllabi.

The now compulsory PowerPoint presentation was prepared but two hours of being talked at is a tall order.

I decided the best approach would be to set the group an exercise on Attainment 8.  One way of looking at potential changes to the curriculum over the coming years and the impact of the revised grading system is to calculate Attainment 8 over the next four years commencing Summer 2016.  Whilst Progress 8 is going to be the new headline figure for secondary schools it is based on the Attainment 8 end point compared to the starting point; a pupil’s Key Stage 2 SATs point score and eventually their scaled score.  It will take until 2021 before we have any national data that compares Attainment 8 with the scaled score being introduced in Primary Schools this year.

The presentation gives a summary of the main changes but the following three graphics are required to help determine Attainment 8 from 2016 – 2019.  At the bottom is a PDF document which you are welcome to download and have a go at.  I’ll be using it with our Board of Directors as part of a training session and I think it might be a great exercise for a SLT Meeting so people really get into the detail of the changes facing them.  Once you understand the changes more fully your decision making becomes more informed. 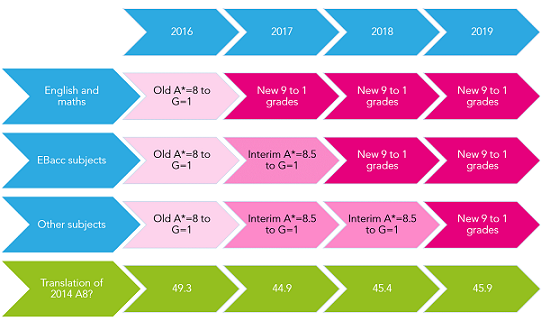 As the new GCSE 1-9 grading system is introduced, with Grade 9 being high, the pass grade is considered to be 5.  This equates to the top end of the current grade C.  Percentage pass rates based on the new grade 5 are likely to drop about 20% and possibly a bit more for the combined Percentage passing English & Mathematics from 2017 onwards.  It’s worth realising that the EBacc pass rate will also plummet in 2017 and then further in 2018 as the EBacc subjects also move to the 1-9 scale.

During the changeover phase from letters to numbers, the table below shows the numerical value of each grade.  High attaining students, and schools who have many of these pupils in, could see point scores rise with the converse true for middle and lower attaining pupils.

The numerical value of the number grades is the number itself i.e. a GCSE grade 4 is 4.

Good luck with the challenge my version of the answers is here.

« Know Thy CPD Impact #SaturdayThunk
Applying to be the Next #HMCI »

12 thoughts on “The Implications of GCSE Changes on School Accountability”