It’s nearly forty years since James Callaghan, the then Prime Minister, delivered his Ruskin College speech that sparked the Great Education Debate.  Political involvement has grown exponentially over the years and is now out of control.  The Headteachers’ Roundtable are coming together with about one hundred and eighty colleagues to discuss, debate and have our say.

At the time of the speech it was probably fair to say that politicians had too little say in education and accountability, for the spending of large amounts of public money, was practically non-existent.  Times have changed.

“I must thank all those who have inundated me with advice: some helpful and others telling me less politely to keep off the grass, to watch my language and that they will be examining my speech with the care usually given by Hong Kong watchers to the China scene.  It is almost as though some people would wish that the subject matter and purpose of education should not have public attention focused on it: nor that profane hands should be allowed to touch it … I take it that no one claims exclusive rights in this field.  Public interest is strong and legitimate and will be satisfied. We spend £6bn a year on education, so there will be discussion.  But let it be rational … To the critics I would say that we must carry the teaching profession with us. They have the expertise and the professional approach. To the teachers I would say that you must satisfy the parents and industry that what you are doing meets their requirements and the needs of our children.”

The challenge we face as school leaders and teachers is not simply to complain about policy we like but to offer viable, well thought through and practical policies to replace ones that are less than helpful.  We don’t always do ourselves a favour; look at the data below showing approximately 8,000 students being removed from school rolls between the Summer Term in Year 10 and Spring Term in Year 11.  I understand it; schools fearful of poor results and what might happen but it’s a moral outrage.  The students removed from roll will be the poor, the vulnerable and those with special needs.  This cannot be allowed to continue. 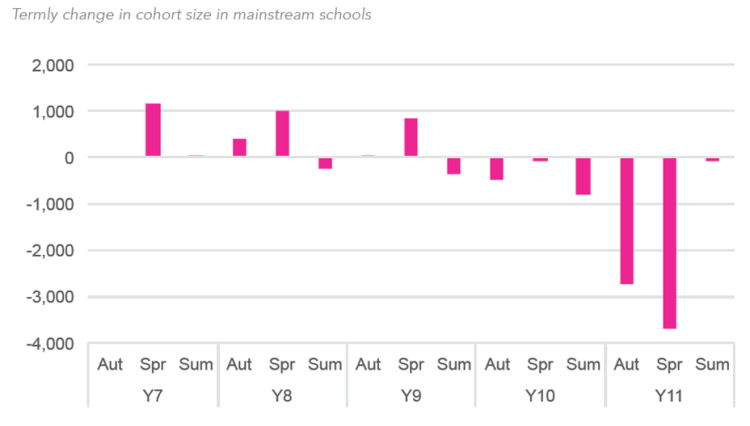 How can we turn a high stakes, cliff edged accountability system that benefits schools who behave in perverse ways around?  This will be the strand I focus on at the Think Tanks with others taking the lead on “Structures” and others “Recruitment & Retention”.

Interestingly this week the new Chief Inspector, Amanda Spielman, suggested she might scrap the Ofsted “outstanding” grade and be more evidence led.  The latter is particularly interesting when put alongside a £31 million black hole that has appeared in Ofsted’s finances and the perennial concern over the reliability of inspection.  It may just be we are knocking at an open door; even more important we get some well thought through policies together.

There are certain judgements that Ofsted can make with a degree of validity and ones they can’t, based upon data and a pretty short visit to a school.  For too long we’ve confused the two.  It is right and proper the Government set an expected standard for schools and academies.  This standard should be based on published data over a multi-year time period.  I would argue for a contextualised value added measure; other may argue for something different.  We will see on the 1st July.  In doing this politicians should accept their responsibilities for ensuring they:

The presentation with the various prompts we will be using is below:

Massive thanks to Sheffield Hallam University, Institute of Education and Schools Week who have been partners in putting the day together.  Let’s hope it’s a productive one.

« What Have the Arts or DT Ever Done for Us?
12 Pointers Towards Great Teaching Assessment and Learning »