Texting Your Way to Improved Attendance

The link between good attendance and higher levels of attainment are pretty well established.  Many school leaders talk about “quality teaching first”; I understand and accept the basis of their logic but if a pupil isn’t in the classroom s/he won’t benefit.  You’ve got to get them in first.

The issue is more urgent for pupils from disadvantaged backgrounds.  On average Pupil Premium attendance rates are below their more affluent peers and for those who are long term free school meals rates are desperately low.  They don’t simply miss the learning on the day they are absent; absence also creates significant, chronic and exponential gaps in knowledge upon which future learning cannot be securely built or connected.  Their learning lacks a systemic coherence and appears instead as a series of increasingly unrelated snapshots.

The Trust has already embedded a whole series of attendance letters to parents based upon research at Harvard University, Absence Matters and You Can Help (one of the most read blogs on my site).  The use of text messages, direct to pupils, is an addition to our approach to improving attendance. 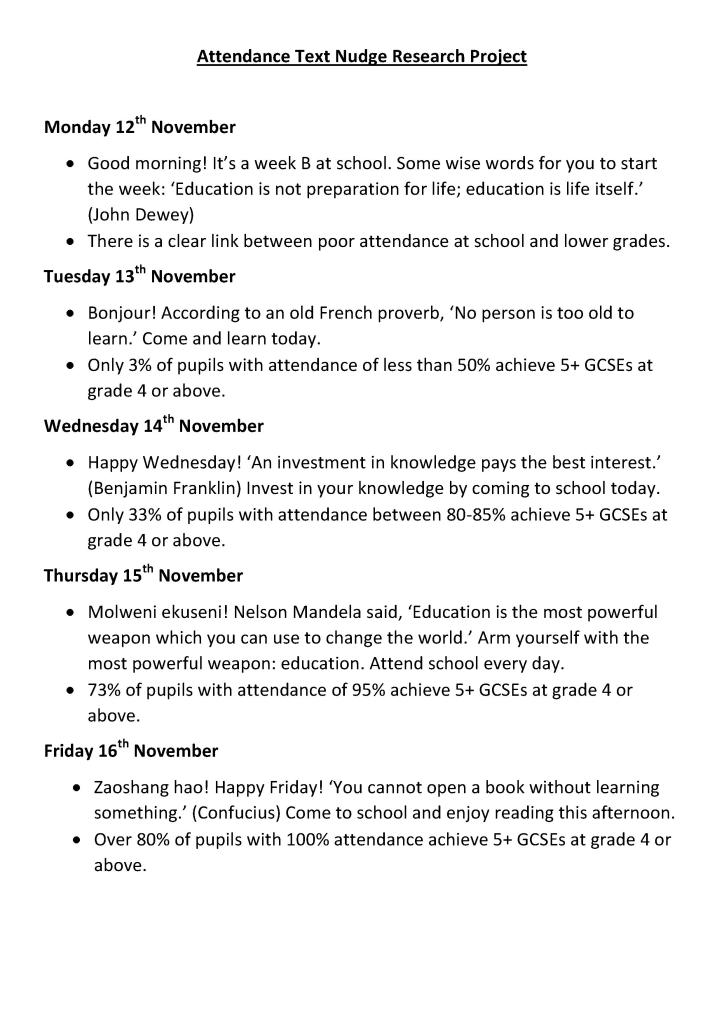 The texts come in two parts: good morning we’re looking forward to seeing you in school today and a link between good attendance and higher attainment.  The texts go directly to the pupils’ mobile phones; they had given written consent to this happening.  Letters were also sent to parents giving them the chance to opt out on behalf of their child.  A full set of text messages is contained in the document below:

If it proves successful then the fifteen pupils in the control group will start receiving the texts.  The term successful is rather loose; whilst we hope to see a massive improvement even a small improvement would justify us continuing with the approach.  This is because it costs next to nothing and is workload light after the initial set up; in fact it is next to no effort to run.  It is a simple to scale intervention, using the automated text messaging software, that can readily be transferred to other schools.

Looking at pupils’ attendance data up to week 12 of the academic year (pupils this year in Year 10) and comparing to attendance up to week 12 (same pupils, last year when in Year 9); on average the attendance of the control group is -1.2% compared to the intervention (text) group which is +4.5%.  We’ll keep going for a few more weeks before pulling together the final data.  Anecdotally, many of the pupils who have received the text messages are chatting to staff about them; what language was the greeting in; is that statistic true?  These conversations are the start or continuation of relationship building which helps embed the intricate network that binds us together.

By way of contrast, we used to send out a minibus to pick up disadvantaged pupils who had really poor attendance; two members of staff every morning for a couple of hours.  It was very costly and invasive.  The folklore was this had a really positive impact on attendance and if we stopped it then attendance for our disadvantaged groups would plummet.  The reality when I asked for the data; it had no impact whatsoever on attendance: nothing, zilch, nada.  An utter waste of time and money; if the pupils were going to come in the lift was a bonus; if they weren’t than getting them to school quicker didn’t provide an incentive.  Always evaluate what you do.

Thanks to Phil Brown, Deputy Headteacher at St. Mary’s Catholic Academy, who has led on this work and provided all the information for this blog.  You can follow him on Twitter; he tweets as @ListenLeadLearn

« Are Assessment, Data and Tracking Systems Worth the Effort?
Ofsted’s New Framework is Beginning to be Exposed »