I’ve just returned from a great few days at the annual SSAT Annual Conference.  The Vision 2040 Campaign is beginning to gather momentum and it was good to stop and look at the horizon alongside the current challenges and opportunities we face. 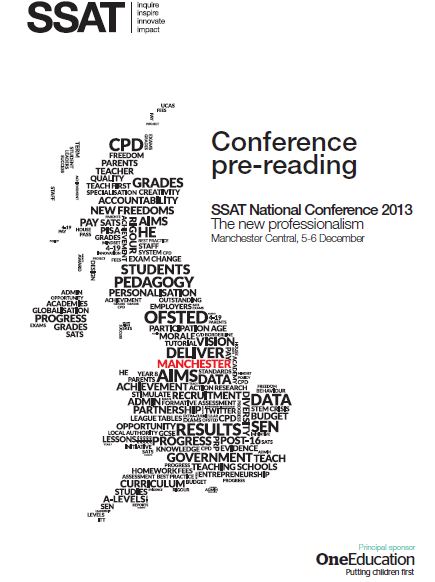 The massive challenge of Vision 2040 is becoming more and more apparent to those of us who are engaging in it.  It is almost impossible to predict, and maybe even imagine, the detail of education in 2040 but what is possible is to look and attempt to discern a direction of travel.  It is more about identifying the main threads rather than seeing the whole picture in detail.  One of the things I hope will change by 2040 is the clarity about the role and part to be played by central government, the newly emerging and much more diverse middle layer in education – academy chains, federations, multi-academy trusts, teaching school alliances, local authorities – and loose clusters of and individual schools.

Vision 2040 is an idea about how power may shift within the system, over the next twenty five years, what may stay the same so still be familiar ground to us in 2040 and what are the cul-de-sacs we are currently travelling along, leading no-where, that will require us to change direction.

This blog has been rather longer in the planning then some I write.  Like many headteachers and teachers in schools the post-level World takes some thinking about.  I decided a few weeks ago to post this as a follow on from the SSAT National Conference 2013 – The New Professionalism, which in my usual lucky way, has meant I can now pull on some great recent blogging.  I’ve added a list of four blogs at the bottom of this post that I would tend to read in the order they are given.  The bloggers Tom Sherrington, Kev Bartle & Alex Quigley are all part of the Vision 2040 Group and Joe Kirby should be.

Many schools, both primary and secondary, are beginning to grapple with the new National Curriculum (bit of a misnomer for me, I’ll explain why later), changing assessment procedures at the end of Year 6 and at GCSE (with nobody able to say what they will look like) and the disappearance of levels.  I’m a bit ambivalent about this last one for a number of reasons.

Levels had a purpose:

Levels were a bit of a nonsense:

I tend to think of assessment, with the associated accreditation at certain times during a child’s education, serving a number of different masters:

The current system hasn’t managed to balance these competing demands at all.  In many ways the one it has least supported is children’s learning.  The challenge we face is that assessment, and the accountability that follows, often becomes the only driver for the curriculum delivered rather than assessment being a key element of a more holistic curriculum offer.  This can be even more pronounced in schools that are in challenging circumstances where the “fear” of Ofsted has a disproportionate impact.

So, if assessment forms part of a curriculum, how can you have a National Curriculum without a National Assessment Framework?  It’s a bit like having a motor car without a motor!

Just Give Me Some End Points

Why not tip this current thinking on its head and have a National Assessment System but no National Curriculum?

There is a point at which, when something breaks, we stop trying to fix it and get a new one.  The current national examination and assessment system is broke: it’s not fit for purpose and no amount of tinkering will change this whether it’s grades to numbers, coursework to terminal written examinations or talking about making them harder whilst muttering something about “world class and global comparisons”.  It’s broke, we are in the wrong jungle and we need to start again with a blank piece of paper.

Should We Go All Music, Drama & Dance?

Music, Drama and Dance might not be top of the educational agenda for excellence, at the moment, but they all have something in common.  Learning to play an instrument or drama or to dance have a national grading system that is based on mastery.  It is applicable across the country, irrespective of age and requires mastery.  The screenshot of the ABRSM has a great line, “Our exams, motivating students of all levels and ages”. 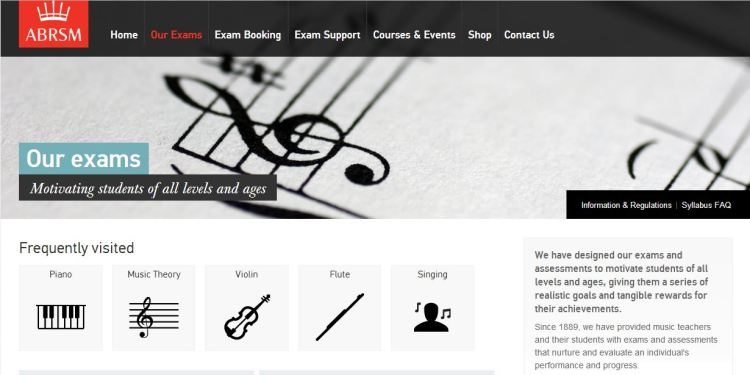 Students start by mastering the basics to achieve a grade one and then through a series of increasingly challenging and technical tasks they progress through the grades.  The level of proficiency required at level 8 is extremely high and sets the standard for entry to higher study in a Music College.

The Prize – A Coherent, Structured & Sequential Curriculum from 3-19

What would it look like if we ditched grades at GCSE & A-level and whatever is being proposed at Key Stage 2 for a set of gradings based on a national grading system for 3 – 19 year olds?  To me the potential of this is we can set the assessment system within a coherent, structured and sequential schools lead curriculum from the beginning to the end of a child’s education – I’ve recently blogged about this idea of a continuous 3-19 curriculum in “When Strategic Met Operational”.

At the moment the tail is definitely wagging the dog, assessment is having a perverse effect on the curriculum children experience.

The current work many people are starting, in their schools or within their phases, will ultimately be incoherent and idiosyncratic although some bits of it might be very good.  A curriculum has to go cross phase and across schools and it may be worth viewing it from the point of view of the key assessment milestones rather than pages and pages of what to teach and how to do it.  Define the standards – particularly in terms of the conceptual understanding required a cross the range of knowledge dimensions – and leave schools and teachers to connect and work together to do the rest.

Vision 2040 has to aspire beyond having some “good bits” to excellence for all.

There are possibly some key milestones that we would all agree on pretty quickly, my suggestions would be:

These maybe insufficient in terms of the number of milestones and I would suggest more are need between school and secondary ready and secondary ready and further education ready.  (Alex Quigley kindly gave some feedback on a first draft of this and suggested there were too many.  I can’t see any political will to reduce the level of accountability and hence removal of assessment at the end of each phase of schooling but maybe by 2040 you never know).

We need to set the assessment levels within each grading at a sufficiently high level.  For example, Pass, Merit & Distinction levels could require 60%, 75% and 90% marks to be achieved and I’m not against setting it even higher at 70%, 80% and 90% – we need to master something before moving on or we build on rather weak foundations.

The key to this “grading system” is that at each level there is an expectation in terms of the knowledge “mastered” by a child – factual, conceptual, subject procedural and metacognitive – that can be tested in an appropriate manner.  There would be increasingly a written element and I would expect a move from reading, writing, Maths and aptitude to learn, in the primary phase, towards a wider subject based set of gradings.  Some children will work towards a particular grading, over a number of years, until they achieve it and master the learning required.  Others will accelerate through the gradings and may not actually attempt each grading, in much the same way in Music a student might go from Grade 2 to Grade 4.

Not everything can be assessed in writing and I fear current proposals will see the best essay writers suddenly acclaimed as the best scientists, geographers or technologists.  The thresholds for secondary ready moving into further education or higher education require increased scrutiny and system assurance, particularly any aspects that involve an element of controlled assessment or coursework as part of a grading.  The old ASCL idea of a national network of Chartered Teachers has much to commend it.  I will cover this another day in The New Professionalism: Graduate, Master and Chartered Teachers as a way of looking at the current structure for teachers that for me is another broken system that won’t be fixed by tinkering.

Impact & Implications for Teaching and Learning

The blogs below are moving in the direction of mastery learning either implicitly or explicitly. It is not just in Maths, though this is an often cited example, that children must master the basics if they are to develop their understanding in an area.

The organisation of schools and the curriculum would change.  The changes could be as big or small as you want, cross age classes or different groups in class or different classes working towards the various gradings.

The current system works against learning and lacks coherent.  I have little hope (and I’m quite an optimist) that much will change by 2020 but let’s hope by 2040 we have something worthy of our children, teachers, schools and society in place.

Spirit Levels: Exercising the Ghost of Assessment Past by Kev Bartle

Designing a New Curriculum – What are Your “Big Ideas” by Alex Quigley?